Tyler Cowen has a very stimulating piece on doomsayers missing an opportunity to sell short the markets. I think his (perhaps strawman) argument is correct for those whose views he portrays accurately.

However, I think most people are thinking about Clinton vs. Trump more like this: 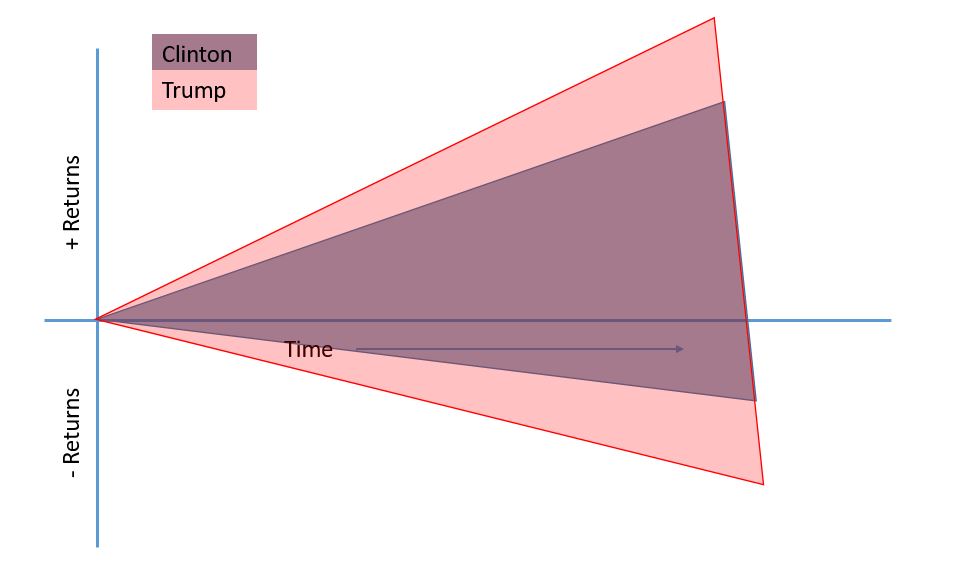 Meaning: a Trump victory heralds a wider range of stock market outcomes. Tyler might argue that someone who believes that has an opportunity to trade volatility through VIX, but VIX measures a very specific kind of volatility which is far from a necessary condition for a decline in markets.

Another possible answer to Cowen’s question about why people aren’t putting their money where their mouths are is that most of the people merely expect worse outcomes for the stock market, but not negative returns. If we knew for a fact that for 4 years under Clinton the market would go up 10%/year and for 4 years under Trump the market would go up 8%/year, what would the appropriate strategy change after a surprise Trump election be? Probably not much.

When Donald Trump was elected president, some prominent economists predicted disaster for the stock market.

are Trump doomsayers obliged either to stick with that prediction and short the market or to tone down their rhetoric?

I don’t actually know who any of these people are (are we talking about Krugman?), which is probably some combination of my ignorance and Tyler thinking of people as prominent that I don’t follow closely. (And I’d confidently put myself in the 95th+ percentile of people who follow prominent economists.)

I do know of plenty of people who claimed a Trump victory would be a human rights disaster, and while obviously less measurable than the stock market, I think a ‘correction’ for human rights would be just as damaging to society as a correction in the markets.

1 thought on “Stock Markets in a Clinton vs. Trump World”